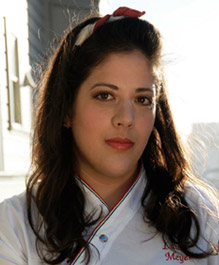 Laura Meyer first entered the restaurant industry in 2006 at the young age of 16. She began working alongside Tony Gemignani right from the beginning in which he quickly became her mentor. During her college career Laura studied abroad in Italy where she learned to speak the language as well as embrace the culture and love of food. It was during this year abroad that Laura was first introduced to the competition side of the pizza industry. After graduating from SF State in 2011 with a Bachelor’s degree in History Laura moved from Tony’s first location to his main location in San Francisco, Tony’s Pizza Napoletana. At 22 Laura took on the Kitchen Manager role and transitioned into the Head Chef and head pizza maker position. In 2013 Laura entered the Pizza in Teglia (pizza in the pan) division in Parma, Italy and went on to win first place as the first female and the fist American to win this category. The next year, in 2014, Laura went on to win top honors in the Non-traditional division at the International Pizza Expo in Las Vegas. During that same year Laura was voted one of the top 30 Under 30 by Zagat. Since then Laura has gone on to be recognized by various publications such as Hoodline, Thrillist, and Restaurant Hospitality as well as been listed as SF Chronicle’s Rising Star Chef’s, one of Eater’s Young Guns, and even noted as one of Forbes 30 Under 30 for the restaurant and Beverage Industry in 2016. In addition, Laura is a speaker at The International Pizza Expo hosted by Pizza Today magazine and has been the administrator and one of the teaching assistants at Tony Gemignani’s International School of Pizza since 2012. Recently Laura has left the Head Chef position at Tony’s Pizza Napoletana to pursue the Corporate Chef position with the Pizza Rock Restaurant Group.